Sir James Galway
“The Man with the Golden Flute” 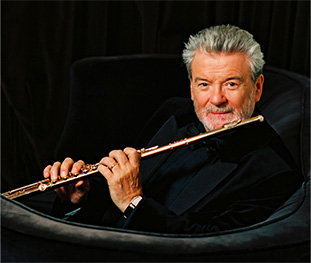 The living legend of the flute, Sir James Galway is regarded as both the supreme interpreter of the classical flute repertoire and a consummate entertainer whose appeal crosses all musical boundaries. A modern musical master whose virtuosity on the flute is unequaled, Sir James continues to perform across the globe. Through his extensive touring, frequent international television appearances, over 65 recordings and 30 million albums sold, Sir James has endeared himself to millions worldwide.

Born in Belfast, Sir James studied in London and Paris before embarking on his orchestral career in such prestigious orchestras such as the Sadlers Wells and Royal Covent Garden Operas, the BBC, Royal Philharmonic and London Symphony Orchestra, before taking up the coveted position of solo flautist with the Berlin Philharmonic under Herbert von Karajan. Since launching his successful career as a soloist in 1975, Sir James has performed with the world’s leading orchestras and most prestigious conductors. From Galway's lips have come definitive treatments of classical repertoire and masterworks by Bach, Vivaldi and Mozart. A major supporter of new music and composers, he has commissioned and premiered a vast array of new works for the flute.

Beloved as a mentor and teacher, Sir James makes time alongside his busy performance schedule to share his wisdom and experience through the Galway Flute Academy & Festival, including International masterclasses, residencies and numerous publications.

Sir James has had the honor to perform for dignitaries from Presidents to Popes, Emperors and Queens, and shared the stage with an amazing variety of entertainers, from Pink Floyd to Jessye Norman. He also devotes much of his free time supporting many charitable organizations such as UNICEF, SOS and Youth Music (UK), amongst others. Among the many honors and awards for his musical achievements are: the Recording Academy’s President’s Merit Award; Classic Brits Lifetime Achievement Award; The Hollywood Bowl Hall of Fame, Artist Laureate of the Ulster Orchestra, the Lifetime Achievement Award from the National Concert Hall, Dublin, Ireland, and numerous gold and platinum CDs. He has been honoured twice by Her Majesty Queen Elizabeth II, with The OBE in 1979 and again in 2001 with a Knighthood for his services to music.